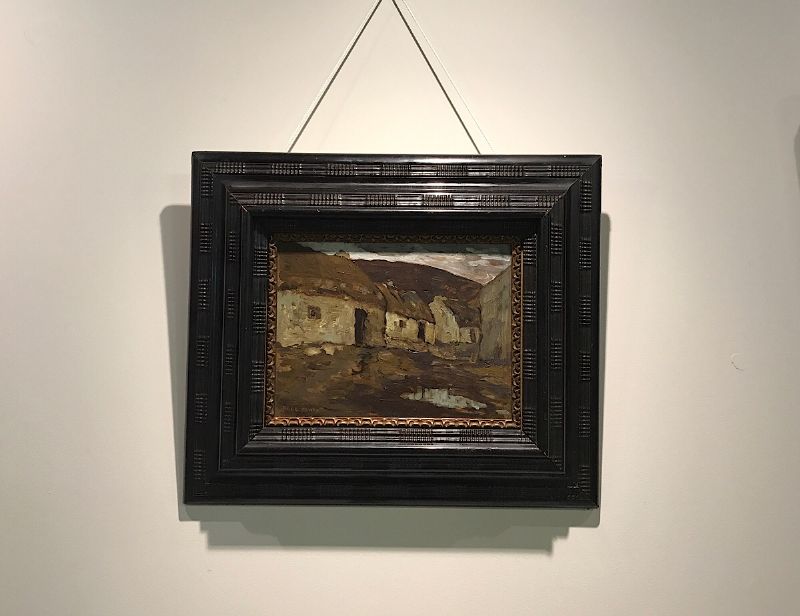 Just arrived to the Gallery before the ST Patrick's day weekend is a unique painting by one of Ireland's most celebrated painters.

This painting comes from the period of Henry's life when he was living and painting on Achill Island. The landscape of The West is what drove Henry to some of his greatest works of Art and earned his reputation as a landscape painter best known for creating romantic visions of a West characterized by sweeping empty skies against dark towering mountains. Going to Achill was like a homecoming for Henry and the absence of humanity in his work contributes to the purity of the landscapes he is best known for most especially the Killary Harbour scenes. In these pieces, the influence of Whistler on Henry is clearly evident in the tranquility of the muted pallette and the mastery of the intricate and delicate lines.

The piece we have in the Gallery may not be in the most sought after style of Paul Henry, there is no sweeping empty landscape with cottages in the distance or bent figures in the fields. It is rather an intimate snapshot of an empty village bathed in silvery moonlight, the faintest hint of the imposing landscape in the distance looming over the village. What makes the piece standout however and is testament to Henry's mastery over his craft, is the sliver of silver moonlight in the foreground. The simplest of brush strokes adds so much to the overall composition and completes the entire scene, giving it a sense of mystery and anticipation. No doubt one can imagine the artist returning through the dark, empty village and witnessing this glimmering scene, simple and humble yet something which inspired him so much he needed to paint it.

We thoroughly recommend coming to see this beautiful piece in person, as one like this rarely comes along.