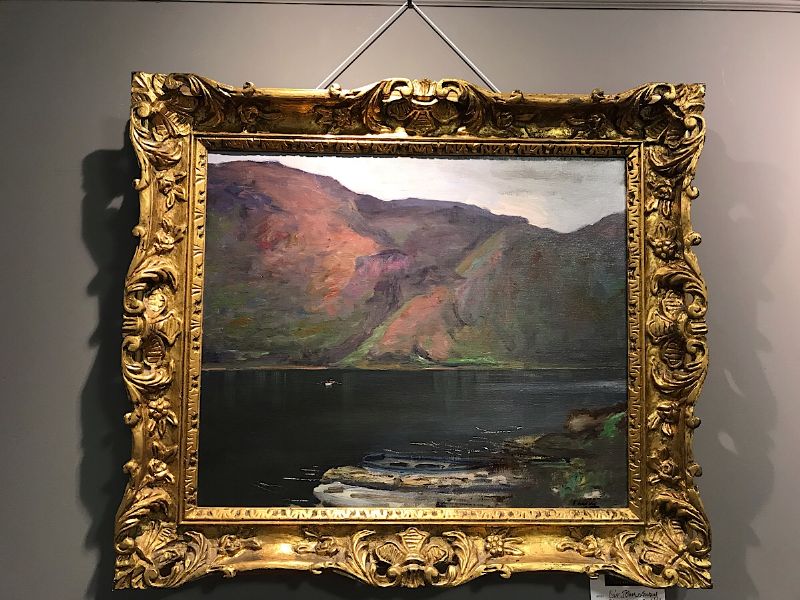 In July 1924, the Laverys arrived at Mount Stewart on the Ards Peninsula on the occasion of the painter receiving an honorary doctorate in Civil Law from Queens university.
Following this was an invitation from WB Yeats to attend 'Aonach Tailteann' a sporting event in Croke Park Dublin, this lead to a long journey to Killarney in the South, a tour in which Lavery intended to paint a series of Southern Irish Landscapes with an exhibition in mind.

Glendalough was the first stop upon leaving Dublin. It's sacred Lough and ancient ruins had long been a source of inspiration for artists, particularly watercolourists. Laverys depiction carefully captures the tranquility and stillness of the late summer day it was painted on. Now in his mid-sixties Lavery was well used to stopping his car and painting then and there what he saw with no sense of hurry or impatience and this tranquil scene, interrupted by only a rower on the lough, perfectly depicts the scene of tranquil waters framed by the majestic sweep of the Wicklow Mountains. Thereafter the tour was continued and Lavery produced about a dozen scenes on his travels however the exhibition was abandoned in favour of another project, however the success of that venture led to an American tour of Laverys work in which some of these pictures from his southern Irish tour were included, Glendalough being one of them.

Lavery had no doubt been drawn to this scene because it depicted Irelands perfect romantic beauty and the tour itself was a chance to revisit The Lakes of Killarney in particular, which moved him to paint his monumental triptych 'Madonna of the Lakes' before the war.
Now the old places could be revisited in light of the Easter Rising and the Great War, they must be treated anew and permitted to sing their own unique song, Glendalough was the first to receive this treatment.